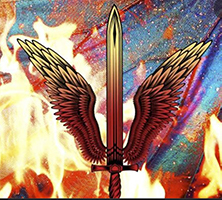 Hallelujah, in the name of the Lord Jesus Christ, I testify. I would like to testify about how I came to Christ in the True Jesus Church and how the Lord Jesus saved me from the disturbance of unclean spirits.

Paralyzed from an Accident

During the framing of my current home in Huntington Beach, I came to supervise or check on the progress of the construction. While checking, I was climbing on the second floor where I want to ask them to build an extra closet in the attic. And when I was climbing up the stairs, I didn't know that the framing of the second floor ground was not yet complete. There was only insulation sponge and no wood panels underneath the floor joists.  So then I slipped in between one of the small framing square and air dived to the master bedroom floor. Then I lost my consciousness and was sent to the hospital. After that, I found out that I became a paraplegic from the waist down.

After injury, the doctor said that I had only 1% chance of recovery. This is because they found that my spinal cord has been completely severed. During surgery, my spinal cord was reconstructed and steel pins and a steel cast were used to keep my spinal cord rigid in place. I was in Hoag Hospital in Newport Beach for 6 weeks then transferred to St Jude hospital of Fullerton for a three month rehab.  During rehab, one of the hooks that bolt the rods of my spine popped out. I cannot feel the pain but I sensed that the movement of my body was not the same. No one believed me when I tried to explain. Later, I joined a private rehab where they use electric stimulation for 4 hours daily; this really killed my back. I had to lay down for 16 hours a day. After 3 years of numerous tries, I finally asked a doctor to remove my steel spinal cord support column because it became very painful. After removal, I no longer have any support in my back and life was never the same again.

I could not believe that I would never recover. Out of desperation, I tried ALL of the alternative medicine I could get my hands on. For instance, I tried Buddhism and connected with 一貫道 (I-Kuan Tao or “IKT”), which is a new religious movement from China that incorporates elements from Confucianism, Taoism, and Buddhism. I also went to worship at various temples, and in different countries like Thailand and received different “blessings”, ceremonies, charms, talismans, and incantations.


During that time, I also tried something called Harnessing Human Energy using Qi Gong (the practice of aligning posture, breathing, and mental focus to guide the “qi” or life energy, through the body). I practiced this form of meditation for 5-6 years to see if my nerves could be regrown. Using meditative training, I utilized my inner breath awareness, visualization, mantra, and mental focus on qi circulation, to empty my mind and balance the qi in my body.

After practicing Qi Gong, I found that I could be refreshed physically after only 4 hours of sleep. But I also noticed in the fourth or fifth year of my Qi Gong meditation practice, spiritual disturbances started. I was not aware that in Qi Gong meditation, there are actually spiritual influences at work. These spirits are demonic "spirit guides" that enter when one meditates. While meditating, one is supposed to empty one’s mind and to try to find “oneness within themselves” so they can find that “intrinsic life energy.” In this way, one can develop the human potential, by accessing higher realms of consciousness, and thus awaken one’s “true nature.”

While emptying my mind, I felt that I somehow opened some kind of spiritual window so uninvited spirits started coming in to my life to disturb me. These were things that were beyond my comprehension and control. Since Qi Gong traces its origins to Chinese Confucianism, Taoism, and Buddhism, it has its roots in idolatry and mysticism. It seeks a more super human state, by relying on certain invisible forces, the practice which relates to idol worship, I personally experienced that Qi Gong is not merely a health exercise, but a form of idol worship which is not clean and not pure.

During these periods, I feel more and more spiritual disturbances, everywhere I went. Anything I attempted to do was unachieved—things did not go smoothing. I felt like I am locked inside four
walls without windows, and the space between the wall and me was shrinking. Every day, I felt I was close to suffocation.

Finding the True Jesus Church and Receiving the Holy Spirit

One day my boss told me he converted to Christianity from traditional serious Buddhism family. After conversion, he testified that he feels great because "he can pass all his problems and worries to our Lord Jesus." So he invited me to join him at his church in San Gabriel. I told him I was willing to try but his church is too far away from my house.

Later, I met a member of True Jesus Church (“TJC”). He told me that the TJC is very spirit oriented or (“很靈”). So I asked to be brought to this church since I felt that my spiritual disturbances had to be combatted by a more powerful spirit.

Arriving at TJC, I still remember how I was totally shocked and unnerved by the way people prayed in Holy Spirit and spoke in tongue. After calming down for a few days, I thought to myself, since my issues were spiritual problems, I need to return to TJC to find my help.

After attending a few services, I then was able to attend the Spiritual Convocation at TJC in Cerritos. During the second evening of the Cerritos evangelical night, I went up to pray in the front. I saw how others were praying around me and I began to admire their prayer. I wanted to be able to say “Hallelujah” and be able to praise God like them in the Holy Spirit.

How was my experience of receiving Holy Spirit? It was very joyful! This was a happiness that came from deep in the heart, a happiness that I never felt before in my real life. That evening, though I had previously so much bitterness and sadness, yet I felt like “a flower was growing from within my heart.” I felt like Lord Jesus wanted me to experience the REAL joy in Christ.

I continued to attend the TJC services for a few months. Then during the next Spiritual Convocation in Garden Grove, I got baptized. At that time, the preacher was worried that since I was under attack by demonic spirits that maybe some spiritual incidence may occur at the time of water baptism. The preacher then arranged four members to take me down into baptismal site in the ocean using a beach chair. Thank God, I was peacefully baptized and became a child of God!

After baptism, I continued to go to TJC church and to pray. I also got rid of the idols I could find in my house. The spiritual disturbances started to ease. During that time, thanks to God, I was even able to become fully licensed in my career in insurance and financial planning.

However, the spiritual disturbances did not fully go away. I asked the church for help, so members said maybe there were still unclean things in my house which may allow the spirits to continue to work through. I got very frustrated so I prayed to our Lord Jesus, “Dear Almighty Lord, I don’t know where these unclean things are, could you please reveal them to me so I can get rid of them?”

Thank God, over a couple of years, different things showed up one by one: my mother in law's golden Budda, my husband's Thai Gold Chain with spirits infused in them from a Thai temple, and finally a box of paper curse (咒) from the “White Dragon King” (白龍王) in Thailand. There were other items from other places I worshipped before. So one by one, I burnt or destroyed them.

Ever since I received the Holy Spirit, I would pray in my wheelchair. Sometimes my body will vibrate so much, I felt like I might jump out of my seat. Because I do not have a seat belt, I would always sit in the last row of the church in case I fall forward involuntarily.

Thank God, after three years, the evil spirits have been completely cast out. However, on certain idol or evil related holidays, such as Halloween and others. On especially on certain idol related religious holidays such as Qingming Festival (清明) which is a Chinese Ancestors or Tomb Sweeping Day that is related to ancestral worship, or the "Double Yang Festival" (重陽節) which is the Chinese religious holiday, I can sense the presence of these spirits around me or following me when drive by a cemetery.

Sometimes in the morning, I will be disturbed by images of different face heads hanging on my curtain, staring at me. Or they will come into my dreams during my period cycle when my body is weak. But after these periods of prayer in the Holy Spirit, I am no longer afraid of their disturbances. I just keep asking The Lord Jesus to keep casting them away from me. I learned that though we may receive water baptism, these demon spirits are always around us, ready to attack us when we are spiritually weak. Therefore, it is very important for everyone to pray until you are filled with the Holy Spirit, to rid the sin and darkness within us, so we may cast away the demons around us and within.

He who believes and is baptized will be saved; but he who does not believe will be condemned. And these signs will follow those who believe: In My name they will cast out demons; they will speak with new tongues; and in their hands they will take up serpents; and if they drink anything deadly, it will by no means hurt them; they will lay hands on the sick, and they will recover.” Mark 16:16-18